In 2014, Tremaine Pavlovski from Scotch College, Melbourne, commissioned me to write a show about my ancestors and their experience of migrating to Australia and how this had impacted my own story. The result was ‘Kissing the Blarney As It Flies’, which was performed initially for Tremaine’s Grade 5 class, who were exploring the histories of their own families and responding to them with dramatic works, centred on their own storytelling. Skilfully led by Tremaine, the boys’ work was highly successful; the images, 3-dimensional artworks and installations they created were spectacular.

Later that year I presented this first show about my Irish ancestors as part of the ‘Words On The Wind’ series of storytelling events, at the Library At The Docks, in Docklands, Melbourne. This was a wonderful series of storytelling events, curated by Storytelling Australia Victoria, which explored associations with the Docklands from many different perspectives. My ancestors Peter and Margaret Walsh sailed into Hobson’s Bay in the late 1800s, aboard ‘The Red Jacket’, having left Waterford, Ireland to make a new home here.

Dr. Frances Devlin-Glass, the Director of Bloomsday in Melbourne, saw the show at the Docks and we began discussing the possibility of a storytelling show at the Celtic Club, as a fund-raiser for Bloomsday in 2015. Frances said her audience would appreciate some humour, perhaps some material drawn from The Tain and to be sure I added lashings of hyperbole. I relished the challenge and the prompting to get some of the epic legends of the Irish Fenian and Ulster Cycles under my belt. Reading several different versions of the stories, including Thomas Kinsella’s translation of The Tain, I started to develop material that could be delivered as an oral storytelling performance. Deirdre Gillespie generously gave me some coaching on my Irish pronunciation of the names of characters, places and landmarks, for which I was very grateful. Throughout the process, I also researched more of the history of my own Irish ancestors and began to weave their stories around the legends and folklore, to bind them all together.

Out of this process of research, reflection and improvisation, grew ‘Dancing the Bones of Irish Myth and Legend’, which was presented initially at the Celtic Club, with great success.

Here is Frances’ review, in the Irish magazine, Tintean: http://tintean.org.au/2015/04/01/dancing-the-bones-of-archaic-irish-stories/ 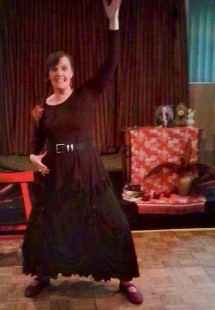 As a professional storyteller/theatre artist, my work focuses on the ancient craft of oral storytelling and the exploration of traditional stories, myths, legends and folklore from around the world and especially Ireland, the land of my ancestors. For over 20 years I have been involved in the making, excavating, shaping and presenting stories for theatre and public events. My work has taken me into a broad range of communities, corporations and educational settings. I have performed for audiences of varying sizes, from over 3000 to intimate garden parties. View All Posts